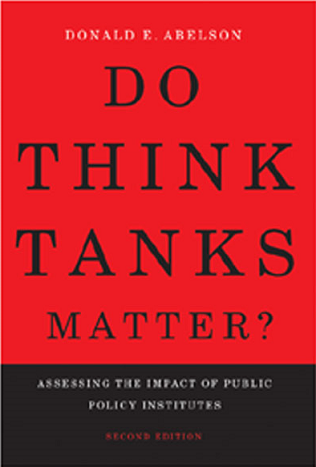 Anyone who wants to understand the differences between Canadian and US think tanks needs to read Do Think Tanks Matter? by Donald E. Abelson.

On US vs. Canadian think tanks:


In size and resources, the majority of think tanks in the United States resemble those in Canada...A typical think tank in Canada and the US has approximately a dozen staff and a budget between $1 and $2 million.

On the proliferation of think tanks in the US:


Few other countries provide an environment more conducive to the development of think tanks [than the US.]  With a government based on separate branches sharing power, a party system in which members of Congress are free to vote as they wish, and a gorwing number of presidential candidates trying to develop new ideas, think tanks have multiple opportunities to shape public opinion and public policy.

On professors vs. think tankers:


Unlike most university professors, who have little incentive to produce timely and policy-relevant research, scholars at think tanks are more sensitive to the policy needs of officeholders.  Put simply, they can provide decision-makers with what they need - clear and concise summaries of the costs and benefits associated with particular policy proposals.


It should not be assumed that the most visible think tanks are necessarily the most influential or credible institutes in the policy-making process.


It is virtually impossible to assign a numerical value to the amount of influence think tanks yield.

Besides discussions about US and Canadian think tanks, the book also has tons of useful charts, (particularly those relating  various think tanks citations in the media), think tank profiles, and budget tables comparing different think tanks.