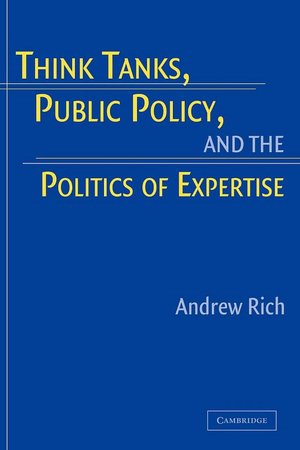 Think Tanks, Public Policy, And The Politics of Expertise by Andrew Rich, published in 2004, is a great resource on US think tanks.

The central question of the book is: "Have think tanks generally evolved from producing painstaking research and objective writing to pursuing ideological agendas with far-reaching impact in the war of ideas?"

On the study of think tanks:


Fewer than a dozen books published since 1970 focus on American think tanks.  No articles specifically about think tanks have appeared in the American Political Science Review, the American Journal of Political Science, or the Journal of Politics in the past thirty years, nor in the major policy or sociology journals.  By contrast, scores of books and articles have been published about other types of nongovernmental organizations, particularly interest groups.

On think tanks vs. universities:


The political access of think tanks tends to far surpass that of university-based research institutes, and the incentives to pursue political access are far greater for think tank researchers than university faculty.  University-based social scientists often have professional, if not personal incentives to move quickly from one study to the next and to conduct research relevant to scholarly and theoretically based debates rather than that which confronts the most current and pressing policy questions of the day.


In classifying conservative organizations, I looked for references to promoting the free market system, limited government, individual liberties, religious expression, and traditional family values, or to eliminating racial or ethnic preferences in government policy.  I classified organizations as liberal when they expressed interest in using government policies and programs to overcome economic, social, or gender inequalities, poverty, or wage stagnation.  I also classified calls for progressive social justice, a sustainable environment, or lower defense spending as signals of liberal organizations.

On the explosion of conservative think tanks:


As the ranks of think tanks generally exploded during the 1980s and '90s, the rate of formation of conservative think tanks was twice that of liberal ones.

On think tank testimony before Congress:


Think tanks based in Washington, DC receive more chances to testify than think tanks based elsewhere, an advantage that also increases with the size of the organization.  Think tanks that are newer have a slight advantage, and those that are focused on a broad range of policy issues receive more opportunities to testify before Congress than those that specialize in a narrow set of topics.

On newspaper citations of think tanks:


The author, Andrew Rich, was an associate professor at the City College of New York.  He then served as President and CEO of the Roosevelt Institute.  He is now the Executive Secretary of the Harry S. Truman Scholarship Foundation.
Posted by Think Tank Watch at 2:29 PM